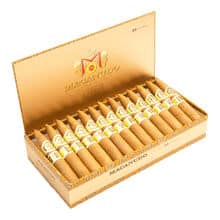 Get the Best Price on Macanudo Gold LE Here

Right off the bat, I can tell this cigar was rolled with perfection in mind — it is aesthetically stunning. A silky, honey-tan Connecticut shade wrapper leaf embraces an ultra-refined combination of Mexican binder and Dominican filler tobaccos in a pronounced pyramid shape. The band visually pops in green and gold, complementing the almost golden color of the wrapper. The nearly nonexistent veins and invisible seams make the stick even more attractive. The cigar’s construction and draw resistance are also flawless, making this cigar extremely smooth and effortless to enjoy.

If you’re looking for a visually appealing cigar from band to wrapper along with a mild-bodied flavor, then the Macanudo Gold LE 2021 Pyramid is the one to go with. A luscious aroma of tobacco with subtle hints of vanilla and citrus characterize its cold essence from head to foot. Slight resistance is previewed in the cold draw, but not overly tight.

From the first draw, the cigar introduced me to a bevy of wonderful flavors. It starts with full notes of charred bay leaves upfront but mellows out with citrus and blends effortlessly with notes of vanilla, light cedar, and a touch of toasted bread around the edges. The flavors are incredibly clean, and not the least bit harsh.

Although “complex” is a fairly ubiquitous term when describing cigars, the profile of this Macanudo’s flavors is complex. Its complexity is only rivaled by its subtlety. It starts off as a solid mellow and stayed on the milder side throughout its significant length, but it slowly increases in strength and flavor with each passing draw. The smoke was light-bodied and rich in delicate flavors, sporting a lovely rich aroma and flavors that matched its taste.

Its aroma remains rich and enticing while its increased strength adds a bitter overtone, which can be surprising, but not in overbearing strong notes. A solid white, slightly gray ash forms instantly and burns slowly and evenly, holding sturdily in the wind.

As the final third closes in, the cigar’s flavors surrender to marvelous notes of a naturally sweet mélange that I rarely experience in a cigar. It slowly transitions to a medium to full body cigar with just that right amount of sharp burn showing up. The cigar wraps up delightfully, full of those wonderful mellow flavors that are marvelously approachable for every level of cigar enthusiast.

Overall, the Macanudo Gold LE 2021 Pyramid is a great cigar to not overwhelm your palate with a rush of spices and nicotine. This cigar’s mellow flavors make it a perfect selection for beginners, but it lacks nothing in the realm of complexity and richness to please seasoned connoisseurs. This cigar receives a well-deserved 92 rating from me. It did not offer all that much in terms of transitions, but its appeal lies in its delicacy. The first thought I had after enjoying this cigar is “I want another.”

Get the Best Price on Macanudo Gold LE Here