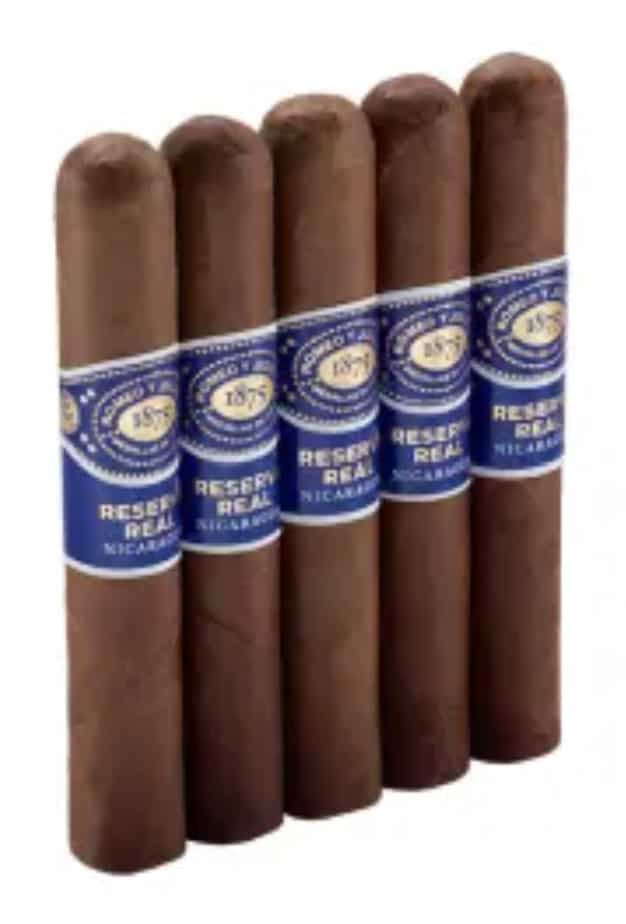 The reviews I saw about the Romeo y Julieta Reserva Real Nicaragua Robusto tell me that you either get put off by it or get hooked. So it definitely piqued my interest for the last couple of months I’ve had it in my humidor. The Robusto has a gorgeous uniformly brown wrapper, with decent oils, and sports only a few small veins. The blue and gold band contrasted very nicely with the dark wrapper, adding to the overall aesthetic and solidifying its visual allure. As with all Romeo y Julieta cigars, this one is beautiful

It was consistently firm throughout and greets with a fruity aroma, immediately reminding me of candied strawberries, with a lingering aromatic waft of leather and mild coffee. The cold draw delivers a peppery spice to the back of the throat, which was surprisingly not as intense upon lighting.

Upon lighting up, rich and chalky notes of wafer-like sweetness, orange bitters, cedar, and a damp earthiness characterize the initial draws. It is captivating right off the bat. As I progressed through the first third of the cigar, I got more toasty mineral flavors as the cedar notes faded to the background, underlined by a hint of white pepper. Every draw is spot-on. It’s easy with a slight resistance, layering the palate with a weighty, substantial smoke that speaks of the cigar’s meticulous construction and fine tobacco.

As the profile unfolds, hints of wheat, creaminess, black pepper, crushed peanuts, and lavender emerge. Most of these start presenting themselves in the retrohales rather than the draws, which comprise mostly of a dominant mineral flavor, rich tobacco, and sweet undertones.

The sweetness builds a little more at the final third trailing parts and slowly starts to level out. Although the flavor flirts with sweetness, it resists any meaningful shifts from the dominant toasty mineral taste. The mild flavor of smooth coffee, just a touch of saltiness, and a vibrant black pepper ramps up in the second third of the retrohales as well.

As I got into the final third of the cigar, the subtle sweetness lingered and the previously dominating mineral flavor seemed to drift away from the cedar and cinnamon flavors and shift more towards a being joined by a refreshing combination of wheat, earthiness, and hints of nuttiness. The leathery flavors also seemed to fade as the earthiness took over. It never got too bitter, but the tobacco notes increased as I neared the end of the cigar and eventually finished off with a pepper burn. The ash is a beautiful medium gray, firm, and sticks on very well. The ash fell off on its own about a quarter of an inch into the second third. One touch-up was in order but otherwise an amazing cigar that I would go back to without a doubt.

The Romeo y Julieta Reserva Real Nicaragua Robusto is as aromatic as it is flavorful. I give this a 90 rating. For a price of $8.77, you can’t get much better than this. It’s a medium-bodied, full-flavored cigar that is extremely enjoyable right down to the nub.